Notice: wp_enqueue_script was called incorrectly. Scripts and styles should not be registered or enqueued until the wp_enqueue_scripts, admin_enqueue_scripts, or login_enqueue_scripts hooks. This notice was triggered by the wp-imagepaste handle. Please see Debugging in WordPress for more information. (This message was added in version 3.3.0.) in /home/insidebu/public_html/wp-includes/functions.php on line 5311
 FG hopeful of Second Niger Bridge’s completion by 2022 – Inside Business Africa
Skip to content 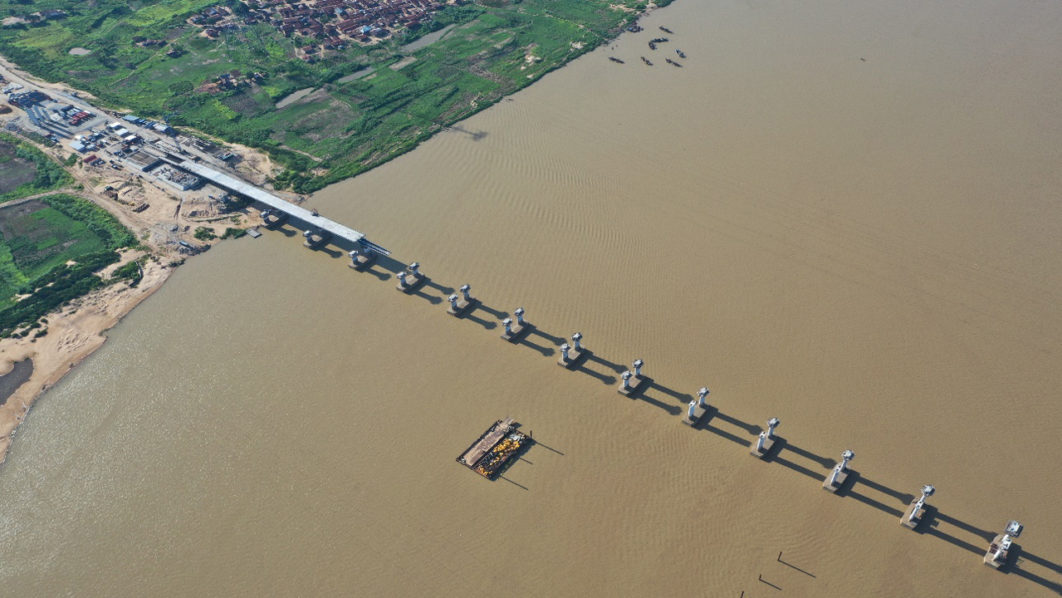 The Federal Government has expressed optimism about the completion of the Second Niger Bridge by 2022, adding that the project is on-going and would aid the influx of investments in the region.

Already, President Muhammadu Buhari has endorsed the progress of work being achieved at the Second Niger Bridge saying that, “the project is on course irrespective of initial teething problems that occasioned some loss of time.”

The President communicated his position, just as the Anambra State Governor, Willie Obiano, and his Delta State counterpart; Dr. Ifeanyi Okowa, lauded the project amid expectations of speedy and timely delivery.

The Minister of Works and Housing, Babatunde Fashola, who represented the President, spoke in Asaba during the inspection/town hall meeting on the landmark priority project.

Fashola said: “2022 remains the project delivery date. That is the Federal Government’s commitment to the N414billion Bridge investment by the government. Of this amount, Roads 2a and 2b alone is costing the government N208billion.”

Fashola revealed that: “the contractor needs about 4million cubic meters of sand, a lot of supplies of cement, 19million litres of diesel including local labour to deliver the project,” adding that all of that is already spinning off multiplier economic and commercial activities within the host communities and states.

On compensation to the communities in the project area, Fashola said state governments are in the best position to liaise with communities on behalf of the Federal Ministry of Works and Housing.

For Obiano, the President, the Federal Ministry of Works and Housing, and Julius Berger Nigeria Plc have remained clearly committed to the project.

He said: “Covid-19 or no Covid-19, we can all see that the President, the Honourable Minister and his team at the Federal Ministry of Works, and Housing as well as the contractor, Julius Berger Nigeria Plc, have remained committed to the work to deliver the Second Niger Bridge.

“Even while evidently proactively observing all NCDC prescribed and necessary human protection and safety protocols, the contractor has steadily continued to incrementally build the second Niger Bridge to the admiration of all stakeholders.”

While urging Julius Berger to within its Corporate Social Responsibility considerations, address any pending issues with the communities, he called on all stakeholders to “support the Federal Government’s initiatives and restrain the restive youths from actions that could hinder the progress being seriously recorded on the project.”

The progress of the ongoing works by the contractor, said Governor Obiano, can only be sustained to full success where peace is purposely allowed to reign on site.

Okowa, represented by the Secretary to the State Government, Dr. Chinedu Ebie, thanked President Buhari for “the massive project and the good progress achieved so far on-site as we look forward to the successful commissioning in 2022.”
Recalling the rich history of the first Niger Bridge and its significance to commerce and industry in the country, Managing Director of Julius Berger Nigeria, Lars Richter, said due to population growth in the area, the high rate of urbanisation, and the geometric increase in traffic volumes over the years, the need for a complementing bridge arose.“The second Niger Bridge is part of a new motorway ring which aims to minimise traffic congestion on the old bridge and to strengthen the entire region – it, therefore, strengthens Nigeria generally and its domestic and international trade routes as well,” Richter said.

Adding that the project was split into three phases, the Managing Director said, while Phase 1 comprises a 1.6km bridge and 10.3km roads, Phase 2A is a 17.5km Asaba link road and Phase 2B a 17.5km Onitsha link road.

On the progress made so far, Richter said the entire substructure of the Second Niger Bridge is completed while the superstructure and finishing works are in progress.

He added that secondary bridges on the main project are also completed. The remaining works which include soil improvement works, culverts, and drainage, Owerri interchange as well as the tollgate are in progress.

“There is no doubt that upon completion, the Second Niger Bridge will ease traffic flow, improve road safety, and create greater opportunities for local residents. It will advance the commercial viability of the immediate area and have a regenerative effect on economic life.

“The bridge adds a robust artery to Nigeria’s transportation grid, ensuring a solution fit not only for today, but for Nigeria’s tomorrow because it is being built to cater for the expected growth in traffic over the next 50 years resulting from increased economic activities, population growth, and new urban developments.

“As a key infrastructure linking the East and the West of the country and a main artery within the Trans-African highway between Lagos and Mombassa, this bridge is a key national infrastructure that will invigorate the South-East of the nation, promoting greater economic growth and boosting of trade and commerce locally for residents, nationally and internationally,” Richter explained.

According to him, the Second Niger Bridge will spur an increase in investments, agriculture, and trade, particularly with the Onitsha Main Market in the region, which is a major trading hub and key commercial capital. The bridge, he emphasised, will allow for improved, more efficient, and quicker connection to Lagos, another key commercial hub. It will surely reduce the hardships of commuters, improve traffic flow and road safety, Richter said.

Speaking on the technical challenges involved in the construction of the Second Niger Bridge, he said: “the chosen right of way for the project’s adjoining roads was carefully chosen to ensure minimal impact on the citizenry and urban development. The construction works have to be achieved on extremely soft and swampy terrain.”

Richter said Julius Berger has met the identified challenges with strong solutions, taking proper consideration of “the varying water level of the River Niger of up to 12 metre between the dry and rainy seasons”. This consideration, he added, has further been supported by soil improvement measures “including vertical drainage and horizontal dam base reinforcement, which are implemented to guarantee the load-bearing capacity and to accelerate the settlement of the sand dams.”

Dr. Richter said that the construction of the Second Niger Bridge is of high priority to President Buhari’s administration and the Federal Ministry of Works. Julius Berger, therefore, understandably has also optimally prioritised the construction works aimed at achieving the best quality as well as successful and timely completion of the bridge for commissioning by the government.