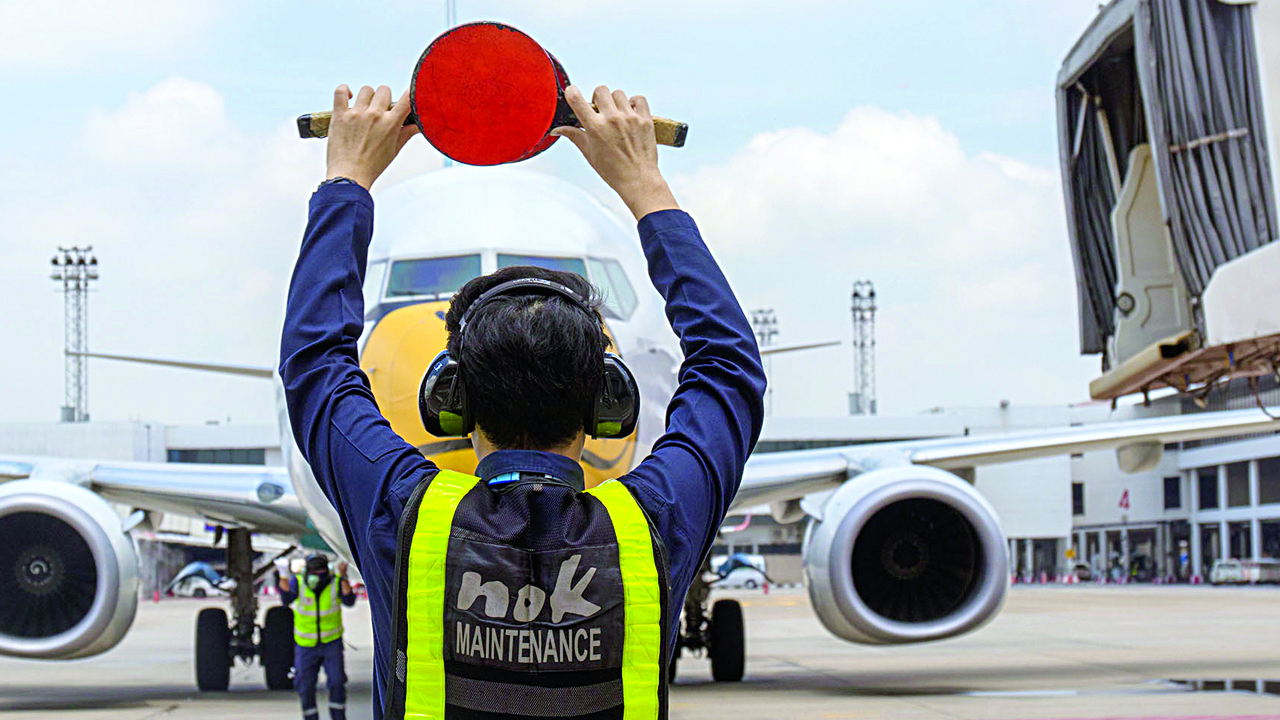 Besides the national pride of flying the green-white-green across boundaries, there is more for the local economy when Nigerian airlines are backed to compete in international airspace. WOLE OYEBADE writes.With a touch of green, the white-colored aircraft is a beauty to behold. Its embossed elephant badge makes it standout at any airport. Elephants rarely fly but this has wings. And without let or hindrance, it flew to all countries that matter. But that was in the 70s and 80s; the golden age of Nigeria Airways.

The national carrier, with a variety of 30 aircraft, had a wider reach across the local, regional and international routes. It had as many as 14 slots into Heathrow airport in the United Kingdom. The airlines were practically everywhere, flying the pride and hopes of the Nigerian citizens.

Today, about 17 years after the last flight and overtly painful winddown, Nigerians can only reminisce about the golden age of a lost airline.

A septuagenarian, Akintunde, mused over the days of the airline, saying the hardship and embarrassment faced by air travellers over flight disruption would not have been possible with Nigerian carrier.

Akintunde was among the scores stranded in Accra, Ghana, for about four days last week when their London-Lagos flight was diverted over harmattan haze and faulty Instrument landing System (ILS) at the Lagos Airport.

He said: “This embarrassment is only possible where there is no self-pride. Nigeria Airways was a self-pride to many of us then. You could feel at home onboard the Nigerian carrier. It is sad that we all still have to depend on foreign national airlines to go anywhere outside this country, treating us anyhow. It is a shame on all our leaders and may posterity never forgive those that brought Nigeria this low.”

A big bazaar
Indeed, the pains of the post-Nigeria Airways era and puny performance of flag carriers on international routes run deeper and across the board.Today, Nigeria has racked up no fewer than 100 bilateral pacts, mostly initiated by our foreign counterparts.

But they make little or no economic sense without Nigerian airlines to reciprocate and compete on these routes. It is not bilateral in essence, but more of a charity bazaar.

The foreign carriers’ attraction to the most populous black nation is not far-fetched. With a population of 200 million people, large middle-class, an airport in almost all 36 states and just an average of six-hour flight to most parts of the world, Nigeria surely has the market any airlines would desire.

Currently, 34 foreign carriers operate in and out of Nigeria almost on a daily basis. Among them are nine African carriers. Besides Air Peace that recently opened the Lagos-Dubai operations, only Arik Air is on the regional routes.

A recent fact-check by the Airlines Operators of Nigeria (AON) revealed that the foreign carriers account for over 90 per cent of about five million international passengers that travel through Nigerian airports yearly. The capital flight is in excess of $3 billion (N1, 050 trillion) yearly.

Not for lack of trying
Recall that the Bilateral Air Service Agreement (BASA) provides for reciprocity by the number of flights and destinations. Not for lack of trying to reciprocate though. It has always being a tale of woes for local airlines on the most competitive international market without the government’s protection that often sustains national carriers.

For instance, one of the flag carriers, Med-View Airlines Plc, until March 2018 operated the Lagos-London and Lagos-Dubai routes amid multiple operational hurdles and alleged stiff resistance from the other end. With the European Union banning its aircraft from operating in the region, and subsequent aircraft lessor’s default, both routes were suspended. In similar manner, Arik Air pulled out of the London, New York and Johannesburg routes in 2017.
Fresh in-road into a tough terrain

Apparently, in recognition of the unusual strength and fleet size from a local carrier, the Federal Government has lately allotted some of the bilateral routes for reciprocity. But stakeholders said the good intention would yield fruits with complementary support and protection of local interest.

From all indications, Air Peace airlines is warming up for direct flights between Lagos, its hub, and Mumbai in India, Milan in Italy, Jeddah in Saudi Arabia, Lisbon in Portugal, and Brazzaville in the Democratic Republic of Congo.

These are on the heels of earlier approval for the airline to run direct flights from Nigeria to Dubai/Sharjah in the United Arab Emirates, Johannesburg in South Africa, Guangzhou in China, London in the United Kingdom and Houston in the United States.

The Chairman and Chief Executive Officer of the airline, Allen Onyema, while disclosing the on-road to India, regretted that despite the huge volume of business between the two countries, as well as the fact that the Asian country is a destination for medical tourism among scores of Nigerians, there has not been any form of direct flights for decades.

“A lot of Nigerians look up to India for their health challenges. They go round the world to be connected to India. We thank the Nigerian government for giving Air Peace the approval as a flight carrier to India.”

He said the airline was waiting for the Indian government to give a concurrent endorsement for Air Peace to commence operations soon.

He assured that just as it did on the Lagos-Dubai route, Air Peace would crash the air fare when operations commence with two wide-body B777 aircraft.

Onyema explained that that the airline was also in the process of opening both the Johannesburg and London routes, adding that the more of Nigerian airlines that operate the international airspace, the better for the customers and the economy at large.

He said it is only local operators that could save Nigeria its monies. “The experience on Lagos-Dubai operations has successfully crashed fares on the route. Where foreign carriers charged about N4 million for a first-class seat, the local carrier does it for N850, 000. Their N3.5million business fare now sells for N650, 000. The Economy class of almost N300, 000 is sold by local airlines at N180, 000. That is what awaits Nigeria when we learn to support and patronise our own,” Onyema said.

Aviation consultant, Tunde Ajaguna, said the route approval was good and quite strategic for the airline business.

Ajaguna said: “China, India and maybe Italy, are the most brilliant for me. These are big-time and age-long commercial routes that have a lot of Nigerian traffic both for business and tourism. It is better late than never. The more of then we can have the better for the economy. We have enormous potential and we cannot afford to continue to look like a Father Christmas to the feisty business world. Let the airlines also show strength, discipline and standard customer service. Then we would have returned to real aviation business.”

Great expectations
Air Peace had earlier set a domestic record as the first Nigerian airline to acquire and register the Boeing 777 aircraft in the country. Three of the four wide-body aircraft it acquired for its long-haul operations to Dubai, Sharjah, Johannesburg, London, Houston, Guangzhou, and Mumbai have so far been delivered.

Industry stakeholders, though marveled at the unparalleled investment in capacity, they are optimistic that the nation’s 14 million annual passenger record may as well be set for a rise when all the routes begin operations. But, the worry is the systemic hurdles that may shackle the enormous potential and attendant opportunities.

President of the Aviation Safety Round Table Initiative (ASRTI), Gbenga Olowo, added that Air Peace was justified in seeking for assistance due to the hostilities meted to Nigerian carriers by foreign governments.

“So, if our government is serious, especially the aviation ministry and the economic regulations department of the NCAA, they should agree with the protection our local airlines are asking for, which is very simple.

“Right now, Emirates is doing seven, and our economic regulators have to reduce it to three so that the market will be free for competition. Otherwise, those doing seven can drop tariffs and will knock off their competitor from Nigeria. So, if you want to help your own, you have to make the reciprocity even,” Olowo said.

“Some cabin crew can be so arrogant to tell you to go and fly your own airline if you are not satisfied with their services. It has been happening over the years. The only solution is having our airline that will be up there competing and doing better than even the legacy airlines.

“Once we have such an airline in place, the issues of renegotiating BASA and reducing frequencies will not occur because the airlines themselves will naturally cut down with effective competition. We are too large a country, in terms of population, not to have our own airline. We need at least three airlines to compete,” Aligbe said.

Aviation enthusiast, Prof. Anthony Kila, added that it is the more the merrier in a free competition, but with some positive supports.

“If they can take away the barriers that are killing the business like the poor infrastructure, cost of finance and high cost of insurance, create security, good communication system, and better airports. Our airports are small. It is not automated; it is still analogue. We need to move the infrastructure forward.”